Posted by Carquestions on You Tube at Friday, December 23, 2011 No comments:

Give Me The Gears 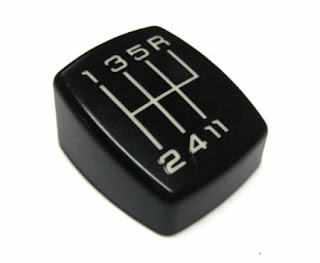 I own a 2001 Corvette and what do you think I love most about this car? Handling, acceleration, looks? Nope. Although I like all those attributes I LOVE it's gas mileage. 23 city 36 highway Canadian. And it does this because of one fact. It has one of the lowest gear ratios ever put in car. This one characteristic, this one car, has made me so angry at the auto company decision makers I could spit nails.

Arguably, the major problems facing the auto industry are poor sales, fuel consumption and pollution.The solution is lower gear ratios. The more revolutions of an engine the more fuel it burns. Therefore the opposite is true, the less an engine revolves in order to turn the driving wheels the further you go on a gallon of gas, its that simple. What determines how many turns of the wheel you get from a given number of engine revolutions is and always has been the gears in a transmission and the gears in the differential. The Corvette's engine has to revolve 1.71 times in order turn the rear wheels once.

My point is this, to all the bonehead decision makers at all the major car companies, start putting very low final drive gearing in the top two gears and let me decide if I'd like to cruise along at ridiculously low revolutions to save gas and make the first 3 or 4 gears high for playing boy racer. This is exactly what my old Corvette does so well. You don't need expensive variable valve timing, hybrid systems, cylinder cancellation or carbon fiber. Gear technology is simple, cheap and proven effective. Chevrolet proved it over a decade ago and so have others. Do you want an across the board improvement of 15% or more in fuel mileage for your cars and trucks?  Don't you want a home run across all model lines? You'll sell more cars, lower fuel consumption like never before in history and the environment well benefit from less fuel burned. Take my advice, if you give consumers performance and high fuel mileage you will be the next Steve Jobs of the auto industry.
Posted by Carquestions on You Tube at Friday, October 28, 2011 No comments:

ON Friday, the minority Stephen Harper government fell on a confidence motion by a 156-145 vote. Speaking to the motion, Opposition Leader Michael Ignatieff attacked the government for disrespecting Canadian democracy and treating parliament with contempt. The myth of Canada being dull is captured in the apocryphal story that in an international competition for the most boring news headline of the year, the winning entry was "Yet another worthy Canadian initiative".
Edmund Burke noted that all that was necessary for evil to triumph was for good men to do nothing. Canadians are certainly good and worthy folks, but they suffer an excess of civil obedience, politeness and lack of civic rage that could be harnessed to combat political atrophy. At a time when Arabs risk life and limb for political freedoms, Canadians seem largely apathetic about the erosion of their democracy.
The centralisation of power in the hands of the prime minister and political staffers - with the resulting diminution of the role and status of cabinet, parliaments and parliamentarians - is common to Anglo-Saxon democracies in Australia, Britain, Canada and the US, but the extent to which constitutional conventions, parliamentary etiquette and civil institutions of good governance have been worn away in Canada is cause for concern.

A minister told parliament she did not know who had altered a document that cut funding to a foreign aid group. Later, she admitted to ordering the changes, but did not know who had carried out the order. Lying to parliament, a cardinal sin of Westminster-style democracy, has become a political tactic.
Following rulings by Speaker Peter Milliken, for the first time in Canadian history, the government and a minister have been found to be in contempt of parliament for withholding information and misleading the house.
The Integrity Commissioner was so inept that she failed to uphold a single one of more than 200 whistle-blowing complaints.
Forced out of office by the ensuing public outcry, she was awarded a $C500,000 severance package on condition that neither she nor the government talk about it. That is, a public servant paid by the taxpayer was financially gagged by yet more taxpayer money to stop taxpayers finding out what was going on.

When a foreign service officer blew the whistle on the Canadian military handing over detainees to Afghan security forces, in likely violation of international humanitarian law, the government tried to destroy him and refused to give documents to a parliamentary inquiry. The Speaker reminded the government parliament controlled cabinet, not the other way round.

After the last elections, when the opposition parties were close to agreement on a coalition majority government, rather than face the house in a vote of confidence, Harper talked the governor-general into shuttering parliament for a month until he shored up his own support.
When the time came to choose a new governor-general, Harper opted for someone who had carefully drawn up terms of an inquiry commission to exclude the potentially most damaging aspects of a scandal involving a former conservative prime minister.
Four conservatives have been charged with exceeding campaign spending limits in the 2006 election that put Harper into power. A minister used public office and material to pursue party-political goals of courting ethnic vote banks for the conservatives.
Having come into office on campaign promises of greater transparency and accountability, Harper has silenced civil servants and diplomats, cynically published guidelines on how to disrupt hostile parliamentary committees, and suppressed research that contradicts ideologically-driven policy, for example data that show crime rates to be falling. Judges who rule against the pet causes of the government's ideological base are not immune to attacks from cabinet ministers.

Civil society groups that criticise any government policy or ideology risk loss of funding and hostile takeovers by boards stacked with pro-government ciphers.
Little wonder Globe and Mail columnist Lawrence Martin describes the government's "arc of duplicity" as "remarkable to behold". What remains unclear is whether this adds up to an indictment of Canadians' indifference to democratic rights being curtailed or of the opposition parties, which have failed to harness the silent majority's outrage.

As Canadians head for the polls in early May, it remains to be seen whether Liberal Party charges of the Harper government being obsessed with secrecy, control, spin and attack ads will resonate with voters. Until then, Oh Canada, we cry our hearts for thee.
Ramesh Thakur is professor of political science at the University of Waterloo and adjunct professor, Institute of Governance, Ethics and Law, Griffith University
Posted by Carquestions on You Tube at Thursday, March 31, 2011 No comments: